Need to know whether AdSense or Amazon Affiliates (Associates) earns more? I’ve been running AdSense along with Amazon Affiliate Program on one of my Flippa-bought sites for the past 9 months. Now I have some solid earnings stats along with Cost Per Click data to analyze and see which one makes more money.

However, before we look at the stats, I want to make a few things clear. First – AdSense did earn significantly more than the Amazon Affiliate Program (also known as Amazon Associates) in terms of dollars, as well as CPC (cost-per-click), BUT … there is always a but:

AdSense had much better placements in “prime locations” of the website, whereas Amazon ads were placed in the middle and in the end of content, and NOT on all pages (but on the most visited ones).

Therefore, the likelihood of an AdSense ad being clicked was much higher than the Amazon ad. Also you need to keep in mind – Amazon pays commissions only for bought AND shipped items that came from clicks on your website. AdSense pays for (almost) every click, regardless of whether a user bought anything in the end.

All info in this post about commission rates based on volume no longer apply.

UPDATE: Dec 9,2016 After buying an Amazon affiliate site that “sells” more expensive items, I figured out the “best” tactic.

Amazon commissions rate are calculated based on number of units. My rate is always 7%. This means that I refer 111-320 item sales each months. If you refer more expensive items ($100+) but you move say 1-6 units, commission will be 4%. Just add few cheap items to the mix and you will see a 50% jump in commissions!

So if that’s the case, but you supplement your expensive items with loads of cheap items, your rate will go up. For example, lets say you refer furniture that costs $700 / each, and you refer 6 items. Your commission will be $168.

If you can’t add enough items on your own, just go to Flippa and buy a cheap (but quality) Amazon affiliate site, that moves a lot of inexpensive items, and bump up your rate!

How much did AdSense earn VS  Amazon:

As you can see, AdSense made 3 times more money than Amazon. However, this is not the whole picture. 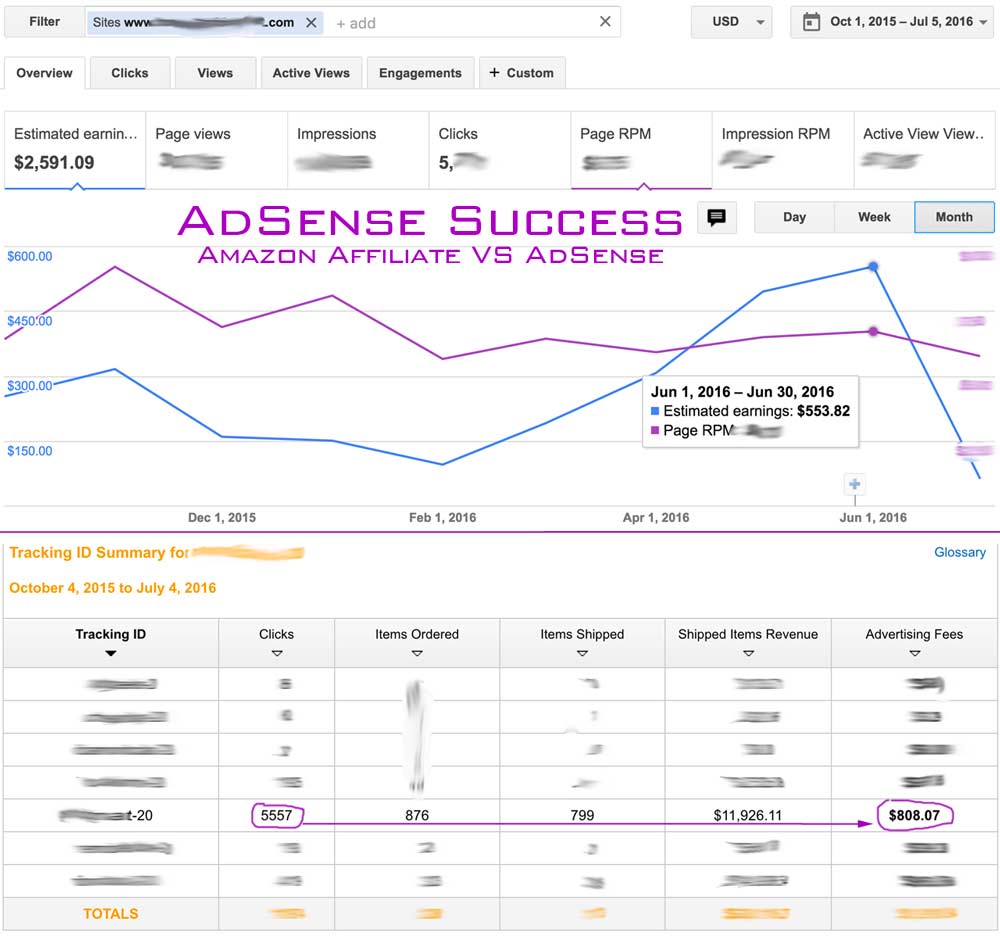 Note: In the image above, if you look at RPM (revenue per 1000 page-views) curve – the purple line – you will see a very slight downward trend. I associate this with larger Amazon ads exposure and the addition of 3rd party affiliate ads in March 2016. Other fluctuations are likely due to change in Cost Per Click and/or Click-Through-Rate during SLOW winter months.

Now let’s look at details. During this period AdSense had roughly 5500 ad clicks. I can’t disclose the exact number, because that would violate AdSense rules. However the number is pretty close to the actual clicks, so we can get some very accurate Cost-per-Click numbers from it.

At the same time Amazon ads got 5557 clicks (799 items were shipped). Based on this data we get the following CPC figures:

Again AdSense CPC is 3.24 times higher than Amazon CPC, so AdSense is a clear winner in terms of dollars per visitor AND per click.

But let’s consider additional factors that affect how much more AdSense would have earned if Amazon ads were not there.

To answer the questions/concerns above above, I plan to do 2 things:

A) Create A/B test on site theme level. One variation will show ONLY AdSense ads in the Most Prominent locations. The second variation will be the current layout and ad types (AdSense, Amazon, 3rd party affiliate program). This is also known as the control version.

B) I’m also going to count total income by MONTH, and divide by total number of unique site visitors since Oct, going forward.

I will report on my findings in a few months (it’s best to let AB Tests run as long as possible), unless I find that either version VASTLY outperforms the other within a short period of time – say 2 weeks.

So this is actually very important, and it means that you SHOULD NOT discount Amazon Associate from your ad mix!

The Amazon ads are for relatively low price items sold on Amazon. The most expensive “commonly bought” item costs $15. Therefore, if items would cost $30, the average commissions would double. For example, I have another site that seldom leads to a purchase of a $600 couch on Amazon. My commission for each of those sales is about $56.

Point is – if your site could lead people to buy $50 items in high enough quantities, you would be making a much higher CPC and a lot more money with Amazon!

This is also reflected in the number of CLICKS to both programs – they are nearly identical, while AdSense has a much better exposure. So if there you combine higher priced items with more clicks, you have the winner!

At the same time, while $0.47 CPC is pretty high, I know many sites that earn about double that, or more! So if AdSense CPC was higher, then Amazon would be a clear loser.

What you should take from this? It all depends on the type of site you have. If your site has a lot of traffic about a popular product on Amazon that sells for $30+ then maybe Amazon would be a much better match for you. The only issue I see with Amazon ads – they look very weird at the top of the page.

As you can see from total combined AdSense + Amazon earnings, in roughly 9 months, I’ve made $3400 which is already more than what I paid for it. However, earnings from the 3rd income source are now between $448 (since April), so it’s safe to say that the site has earned 116.4% in 9 month!

By October 2016, I expect it to make over $5000 total, and probably more, given that In April, the site has made $700, and in May/June it made slightly over $900 each month. If this trend continues in July, August and part of September, the total earnings will be over $6000 for 12 months since purchase!

Lastly, if you want to learn more about  the techniques I use to optimize Ad Placement and to run AB Tests – I will be teaching them in my upcoming AdSense course, so stay tuned for updates! 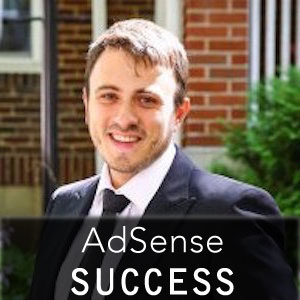 If you need help with your ads, get in touch with me on Clarity: 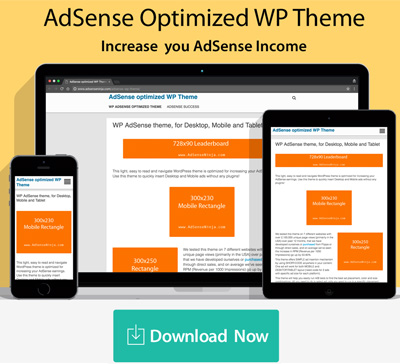